. . . to my web site. I hope you find your visit here informative and at least a little entertaining.

Who Am I, and Why Are We Here?


You are welcome to look at my opera resume, at some reviews, at my musical theater resume, at a list of my compositions and arrangements, at information on other performances, film scores, and recordings I've sung and people I've worked with, and at my upcoming appearances.


If you would like to inquire about booking me for opera and concert appearances, or for television, film, and commercials, please contact me directly. 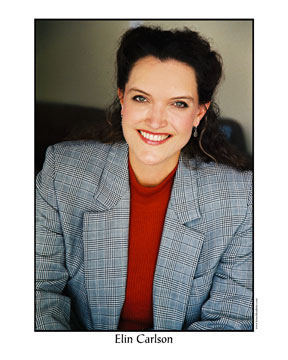 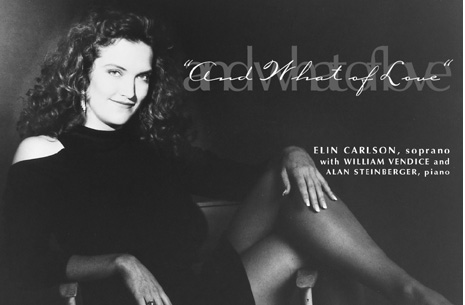 And What of Love, my debut solo CD, is now available on my independent record label, Singularity Records. It features world premiere recordings of song cycles by Los Angeles composers Morten Lauridsen and Paul Gibson, as well as arias and songs by Nicolai, Meyerbeer, Adams, Mozart, Ellington, and Arlen.

I am accompanied by two of the finest artists in Southern California, Alan Steinberger and William Vendice.

You can order yours by contacting me personally by e-mail or online through Eroica Music.

Elin Carlson has had a distinguished career in the United States and Europe, with engagements ranging from the Queen of the Night in The Magic Flute with the San Luis Obispo Mozart Festival to Grizabella in the famous Hamburg, Germany production of Cats . She has also been heard to critical acclaim in the roles of Violetta in La Traviata, Magda in La Rondine, Maria in Maria Padilla, Elvira in Ernani, Gilda in Rigoletto, Constanza in Yanked From the Harem (The Abduction from the Seraglio), Lucia in Lucia di Lammermoor, Amalia in I Masnadieri, Musetta in La Bohme, and Donna Anna in Mozart's Don Giovanni .

A versatile performer, she has appeared regularly in Southern California as a soloist with "Beethoven's Wig", the L.A. Master Chorale, I Cantori, the L.A. Mozart Orchestra, Zephyr, OperaWorks, and the L.A. Jazz Choir. She is a founding member of the a cappella jazz group, Sixth Wave, which won the 2001 National Harmony Sweepstakes Championship. Ms. Carlson spent the month of October 1996 in Japan as a soloist with the Roger Wagner Chorale.

As an oratorio soloist, Ms. Carlson's performances include Handel's Messiah, Bach's B Minor Mass, Vivaldi's Gloria, Mozart's Mass in C (K.427), and Rossini's Stabat Mater . She has extensive experience performing choral and oratorio literature, from the earliest composed works on the North American continent to works of current composers such as Morton Lauridsen, Ed Cansino, Paul Gibson, and John Biggs. On September 11, 2005, she sang the soprano solos for the US Premiere of John Debney's "Passion of the Christ Symphony."

Ms. Carlson has regularly collaborated as a soloist with the composer Danny Elfman on such films as Mars Attacks! and Flubber , as well as for the main title of HBO's "Perversions of Science" and commercials for Lincoln-Mercury, CDW, and FEMA. She recorded a song with Sting*. She can also be seen AND heard in bit parts in The 4th Tenor with Rodney Dangerfield as well as in a recent episode of Malcolm in the Middle. She is the soloist on the opening theme of the newly released and remastered original Star Trek series.

Ms. Carlson received her Bachelor of Music Degree in theory and composition at the University of Arizona, Tucson, and is a published composer. Her marimba concerto and her song cycle for voice and marimba have been performed in Arizona and New York, and her vocal arrangements have been performed by various groups in Los Angeles.

Please subscribe to my monthly newsletter for the latest information on my upcoming performances and recording sessions:
Newsletter/Blog